Barkley has now been with us for a full week, and we have all managed to stay alive!!!  Woo hoo!!!!

Admittedly I’m now drinking wine every night, Jon has man flu, and we are sleeping in separate rooms now that I’m back at work.

It’s not all bad though..I like the wine, I haven’t caught Jon’s cold, and the separate rooms thing is just down to Jon doing the toilet training night time shift.  I haven’t slept this well in AGES!

I’ve also figured out, that if I come down at 6am to let him out, it’s best to make my cup of tea first, before I let him out of the crate.  That way I can take him outside to do his business while the tea cools to an acceptable temperature.  We can then come in, I tuck my feet out of reach and drink my tea, while he shreds the toys I throw at him as a distraction.

Barkley had a visit from his Grandma today (Jon’s mum), which led to much excitement, and some unbelievably good behaviour, thank God.  For years when we had our Chilli, my mother in law thought she looked like a boy so called her a ‘him’.  No guessing for what she’s doing now!!  ha ha!  Perhaps we should invest in a pan sexual dog next time to avoid any confusion.

It’s been steaming hot this afternoon (currently 32 degrees – you can tell I wrote this in the Summer!) and so Barkley spent most of the day just snoozing on the cold kitchen tiles.  This was actually great news for us, as it meant he wasn’t running around trying to score gravel in the garden for a change!

Unfortunately, it did mean that he woke up with a vengeance at about 6pm.  After a day of snoozing in the crazy heat, it was like he suddenly realised that he was late for work and had some serious running, chewing and biting to do before the day was out.

Dinner was kind of like one of those slow mo videos where the couple sit, eating their food at the table, and the rest of the world is speeded up around then by about a thousand percent.  All you could hear was running and scuffling and yipping as he zoomed around the room like a tempest.  The only time he slowed down a little bit was when he actually barrelled into something that got in his way.

Well, he either wore himself out or knocked himself out, but he did eventually conk out, allowing us a bit of precious time to sit on the sofa and say words other than ‘No!’ or ‘Leave it!’.   It’s the small things in life… 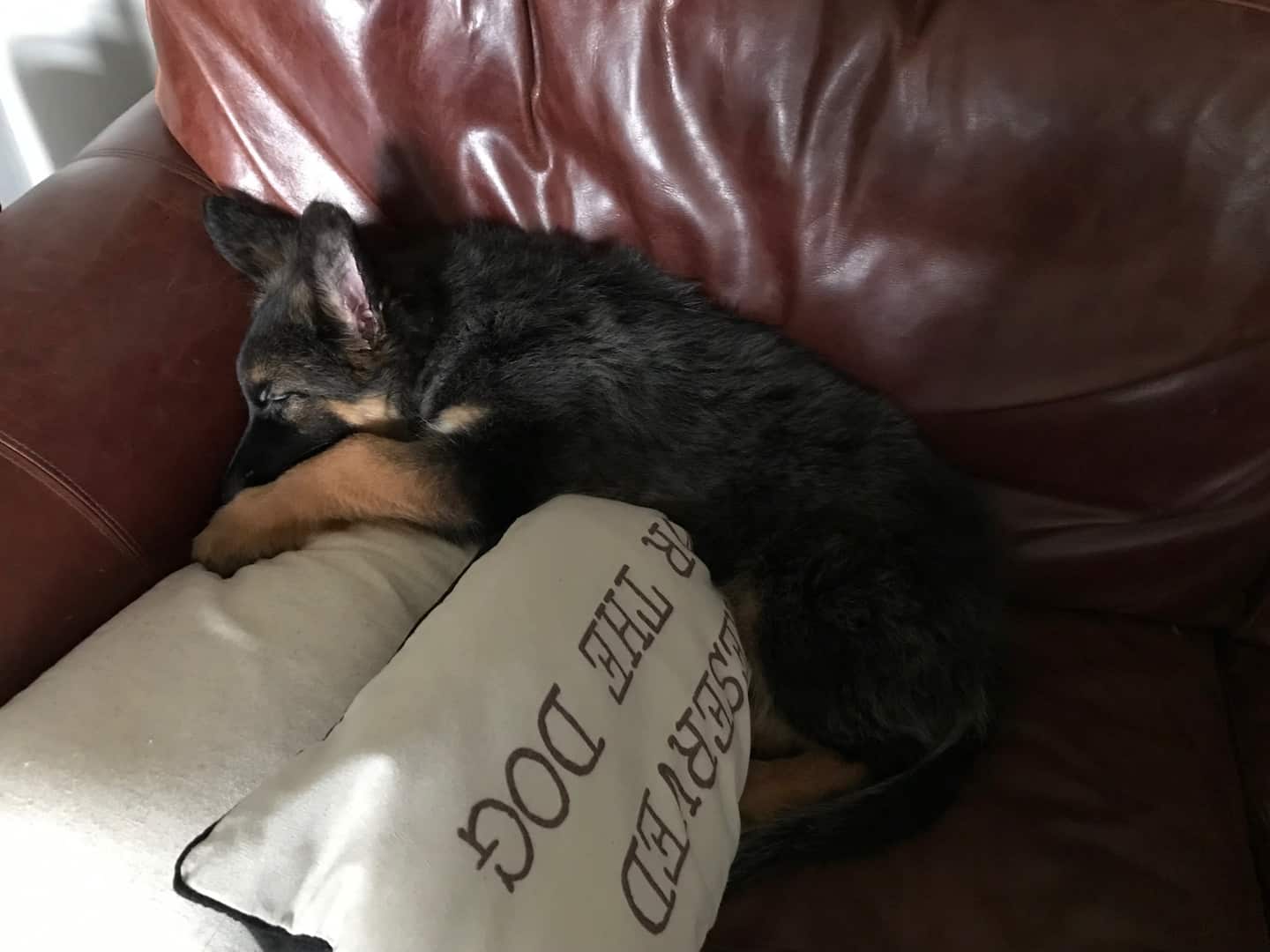 When the little land shark woke up though, he managed to lull me into a false sense of security by running over to me and wagging his little tail.  Heart….melted.

It was all a ruse though, as about five seconds later we were playing tug of war with my dressing gown, and I was trying to climb to the highest point in the room to avoid him ripping my feet to shreds.  This Is Not Fun!!!!!

When I eventually went to bed, it was like trying to cross a room filled with landmines.  I looked at the lounge door from my safe place on the back of the sofa and wondered if I could make it in time without having the world’s tiniest assassin clamped to my ankles.

In the end I just made it, thanks to an intervention from Jon.  I then stood on the other side of the door, sticking my tongue out at Barkley from the safety of the hallway.  It didn’t go down well, as he immediately started trying to dig a tunnel…..

Stay tuned for more from The Dog House Diaries; or have a butchers at my feature about Fabulous Finn